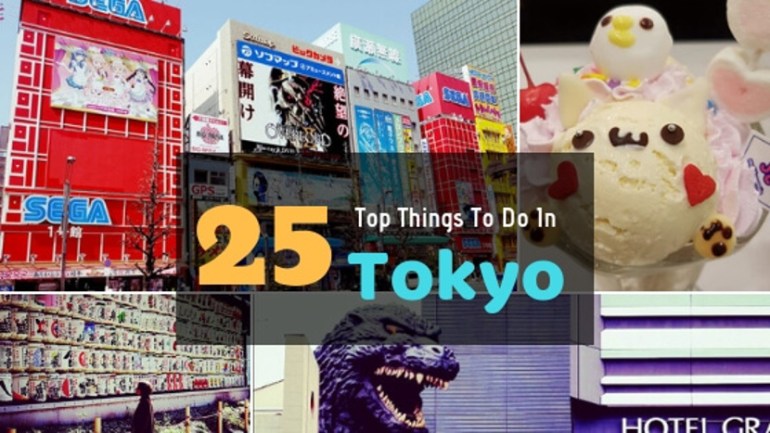 Tokyo has a myriad of activities to do for a first-time visitor. Plan your Tokyo itinerary with this list of top things to do in Tokyo.

25 Top Things to do in Tokyo on your first visit

1. Get a bird’s-eye view of Tokyo at Tokyo Tower


Tokyo tower is a must-do activity when you go to Tokyo. From the observation deck on the tower, you can see a 360 degree view of Tokyo. On exceptionally clear days, you can also see Mt. Fuji in the distance.


Tokyo is the land of Anime and Manga. If you are a fan, then Akihabara’s Electric Town is ground zero. There’s plenty of stores selling Manga collectibles and books. However if you are not a fan, then don’t worry there are other things to do such as exploring some of the giant Electronic stores BIC Camera, Yodabashi Akiba.


Takeshita street is known as the birth place for fashion trends like Lolita Fashion and others. Be ahead of the trend, and shop for some unique and cost-effective items on this street.


Totti Candy Factory, the store that makes huge rainbow-colored cotton candy and other sweet treats, has gained fame because of Instagram. Take a friend along when you try this, you may not be able to finish it on your own. You will find the shop at Takeshita street in Harajuku.

5. See the Godzilla statue At Kabukicho


At Kabukicho, you’ll find the Godzilla statue towering over the Toho Building in Shinjuku. At night, you can even see Godzilla move his head and blow steam out of his mouth!


Meji Jingu, in Harajuku, is a shrine dedicated to Emperor Meji who is held in high respect by the Japanese for his contributions to the growth of Japan. The gardens that surround the shrine are extensive, well-kept and very pleasant to walk in. At the entrance of Meji Jingu, you’ll see a stack of colorful Saki Barrels as shown in the picture. These Sake barrels are donated to the shrine by Sake companies every year in honour of Emperor Meji and his wife.


If you are visiting Japan in March/ April, then visit Ueno park where you’ll see the beauty of cherry blossom in full bloom. You can also take part in Sakura Hanami, a festival of celebrating the arrival of spring by having a picnic beneath the trees.

8. Get a souvenier Gashapon from a vending machine


Gashapon are tiny toy capsules containing toys based on mostly Manga/Anime characters. Electric Town in Akihabara has rows of vending machines and even entire shops dedictaed to these toy capsules. They are relatively inexpensive to buy and cost around 500 yen and above. For fans of Manga/Anime this can be a cool souvenier to get.

9. Ride on a swan boat at Shinobazu Pond


Shinobazu pond at Ueno park is especially lovely during the cherry blossom. There’s also plenty of Japanese street food stalls near the pond during the summer. See my post about the different street food you must try at Ueno park.


The 4 way crossing Shibuya is rumored to be the busiest intersection in the world. It’s also a popular photo/video spot in Tokyo where people come to capture the thousands of Japanese men and women crossing this intersection to get to work. Find out what the buzz is all about by joining in the crowd.

Tsukiji market was famous for the fish market where huge Tuna were auctioned off in the inner market. The inner market has moved to a new location. However, the outer market still exists in Tsukiji and you can savour all the tasty seafood to your heart’s content.

Toyosu market is the new location of the tuna auction which was formerly held in Tsukiji market. This new venue has huge observation decks and windows through which tourists can watch the auction and later sample the seafood at the restaurants in the same building.

Venus Fort is one the most unusual malls that you’ll find in the world. The interior has been transformed to look like Rome, Italy complete with grand fountains and pillars. There’s also an artificial sky which is always blue with fluffy white clouds floating across giving the illusion of a pleasant day no matter what the real weather is on the outside. This coupled together with some great shops make it a mut-see when you visit Tokyo.


Gundam is a very popular science fiction series with a huge fan following. You can see a giant life-size statue of Gundam, the futuristic robot of the series, at Odaiba.

We have all been waiting for the fully automated robots that can cook our meals and do our chores for us. Unfortunately, this dream seems far away and only possible in science fiction. However, there are still semi-intelligent robots that you can buy today at Tsukomo Robots World in Electric Town. The advanced models are very expensive but you can still buy minitaure ones that are programmable and slightly more affordbale.


You don’t have to travel to Newyork to see the Statue of Liberty, you can see it right here in Tokyo. In Odaiba, there’s a replica of Lady Liberty set against the backdrop of the rainbow bridge which is worth a visit even if you have already seen the real deal.

18. Shop in the luxury stores of Omotesando


While the nearby Takeshita street and Jingumae are known for affordable Japanese street fashion, you can buy luxury branded items at the high-end shops of Omotesando. Tokyo Plaza, Omotesando Hills are some well-known shopping malls in this area.

19. Have Omurice and desserts at a cosplay themed cafe


There’s no escaping Anime/ Manga and cosplay when you are in Electric Town in Akihabara. Not only are the streets filled with shops catering to this craze, there is cosplay themed restaurants as well. The most notable ones are maid cafes and Gundam cafe.

The entrance to the Senso-ji temple is stunning and a very beautiful photo location in Tokyo. The huge red lantern that hangs at the entrance leads you to the bustling street market that line the street leading up to the main temple. You can sample various sea food and buy a lot of cheap souveniers in this market.


Zojo-ji temple is very close to the Tokyo tower, so you can see both of these in one go. Near the temple, you’ll see rows of tiny stone statues dressed up with woolen hats and scarves. These statues are Jizo statues, a deity in Japan who is said to take care of unborn children and who guides them through the treacherous paths of the afterlife. The statues are decorated with clothes and toys by parents who have lost children and are trying to appease Jizo. Please keep this in mind when you visit the temple and take care to be respectful.

22. Have a shopping spree in Ginza

Ginza is a place to go if you want to buy expensive clothes and shoes. Departmental stores like Ginza Six, Matsuya, Mitsukoshi are popular places to shop. You will also find some exclusive clothes and shoes at luxury brand stores like Bulgari, Burberry, Onitsuka Tiger and others. The best time to visit Ginza for shopping is at 12:00 PM to 5:00 PM during the weekend when the main street is closed to traffic.

23. Get away from the crowds at Hanazono Shrine


Hanazono shrine is hidden away in a nook and is barely noticeable as people walk the streets of the highly popular Shinjuku area. However, if you want to get away from it all and want to find a moment of peace, then the pretty Hanazono shrine provides just that. The place is especially beautiful in cherry blossom season when the white blossom contrast beautifully against the bright red and orange of the shrine.

24. Get a Geisha makeover

You will probably not find a Geisha in Tokyo, you have to go to Kyoto for that. However, many parlours in Tokyo now offer a Geisha makeover which will be followed by a photo session. These makeovers are a bit expensive but definitely an experience thats unique to Japan.

25. Visit the other tower – Tokyo Skytree

Tokyo has not one but two towers. The other tower is known as Tokyo Skytree. See breathtaking views of the Tokyo metropolis from Sorakara Point, the highest point in the tower standing at 451.2m.

The Beaches Toronto – Top 10 things to see and do

Toronto Islands – Read BEFORE you visit

This site uses Akismet to reduce spam. Learn how your comment data is processed.

This website uses cookies to improve your experience while you navigate through the website. Out of these cookies, the cookies that are categorized as necessary are stored on your browser as they are essential for the working of basic functionalities of the website. We also use third-party cookies that help us analyze and understand how you use this website. These cookies will be stored in your browser only with your consent. You also have the option to opt-out of these cookies. But opting out of some of these cookies may have an effect on your browsing experience.
Necessary Always Enabled
Necessary cookies are absolutely essential for the website to function properly. This category only includes cookies that ensures basic functionalities and security features of the website. These cookies do not store any personal information.
Non-necessary
Any cookies that may not be particularly necessary for the website to function and is used specifically to collect user personal data via analytics, ads, other embedded contents are termed as non-necessary cookies. It is mandatory to procure user consent prior to running these cookies on your website.
SAVE & ACCEPT
Loading Comments...