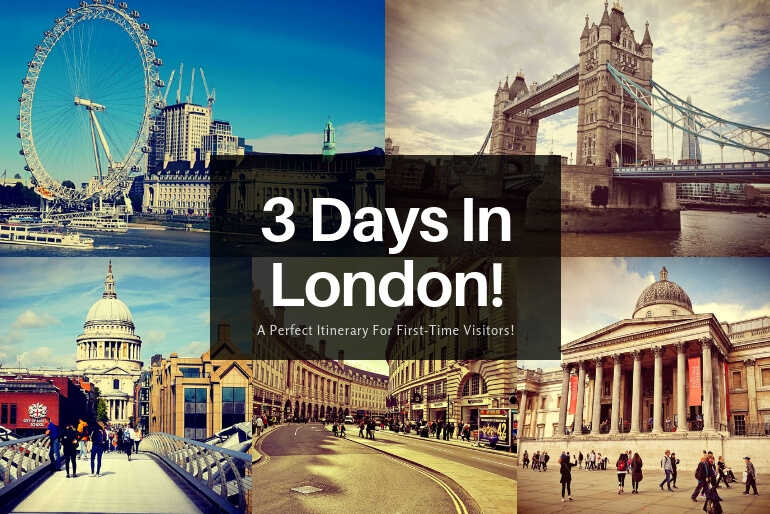 London is a very big city and the number of things to see and do in London in endless. However, if you have only 2 to 3 days in London, then this London itinerary is perfect for you.

The London Eye and the Big Ben

How to get to London Eye?

The closest tube station to the London Eye and Big Ben is the Westminster tube station on the District, Circle and the Jubilee Line. Here is Tube map of London Underground for your reference.

London Eye is a very popular attraction. Not surprisingly, it can have long queues. Skip the queues by pre-booking your tickets and printing at home.

Next, walk to Big Ben and the UK parliament which is right across the bridge from London Eye. Please note, the Big Ben is undergoing restoration and will be covered up until 2021.


The Parliament Square Garden is in front of the Big Ben. Here, you will see bronze statues of some iconic people in history such as Winston Churchill, Mahatma Gandhi, Nelson Mandela, Millicent Fawcett and many others.

Places to eat near Westminster Abbey

There are some pubs and restaurants around Westminster Abbey. Stop for lunch here before continuing.

After lunch, walk towards Trafalgar Square on Whitehall street. Here you will see some armed Police Officers standing guard outside a gate. This is Downing Street where the Prime Minister resides.


As you walk further along Whitehall street, you’ll notice horse guards. If you are planning to take a picture with the Horse guards, be careful; the horses can kick and bite if you get too close.


At the Trafalgar Square , at the end of the Whitehall street opposite to the Buckingham Palace, 4 majestic lion statues will greet you. Trafalgar Square is also home to the National Gallery where you can view art from world-renowned artists.


As mentioned above the entrance to the Buckingham Palace is located opposite to the Trafalgar Square.

You can visit the Palace at any time during the day. However, if you want to view the Changing of the Guards Ceremony , the best time to visit is around 11:00 am.

If you do that, you will have to follow Day 1 of this London travel itinerary in the reverse order.

Places to Eat Near Green Park

After your visit to the Buckingham Palace, cut across Green Park toward Piccadilly. There are many restaurants in the area including the Ritz.

After dinner, walk towards Hyde Park on Piccadilly St. Spend a relaxing evening boating in the Serpentine lake and get a peek at Kensington Palace while you are there.

How to get to St. Paul’s Cathedral

The nearest tube station to St. Paul’s Cathedral is the St. Paul’s Tube Station on the Central line.


As mentioned above, the doors the St. Paul’s Cathedral open very early. Save money on the ticket price by booking online.


The Millenium Bridge is located opposite to St. Paul’s Cathedral. This modern bridge is also called the “wonky bridge” due to the unexpected swaying that people experience when the bridge first opened.

As you walk on the bridge, if you look closely, you can spot tiny pieces of art called the “chewing gum” art by Ben Wilson stuck between the ridges on the floor.

At the other end of the Millenium Bridge is the Shakespeare’s Globe Theatre and Tate Modern. Entry to the Tate Modern is free except for special exhibits.

You can also catch plays at the Shakespeare’s Globe Theatre which is a reconstruction of the original theatre that existed during William Shakespeare’s time.

For lunch, walk back across the Millenium bridge towards St. Paul’s where you will find a number of restaurants.

Spend the afternoon taking a tour of Tower of London. Learn about the history of London and get a chance to view the crown Jewels up close.


Walk down the Thames river path to view the Tower Bridge up close. You can also go to the top of the tower for great views.

Enjoy the spectacular views of the Thames and the nearby London attractions like the Shard and the Gherkin and many others on a Thames river cruise.

Places to Eat Near Tower Bridge

Catch a bite to eat at one of the places below:

Day 3 of my London itinerary is entirely dedicated to shopping as this can be time-consuming.

If you don’t want to shop or spend only part of the day shopping then try one of my alternate Day 3 ideas .

What are the main shopping streets in London?

The main shopping street in London are Regent street, Oxford street and Carnaby street which are part of an area called Soho.


At Oxford Street in Soho, you can shop everything from high-end luxury items to souvenir items. Some of the departmental stores of note in this street are Selfridges, John Lewis, House of Fraser on Oxford Street.

If you are looking for the Apple Store and other designer fashion stores such as Coach, Burberry, Michael Kors then head to Regent Street which run perpendicular to Oxford street.

Hidden in the alleyway between the Gap Store and Coach Store on Regent Street, is the Carnaby Street. It’s easy to miss this street completely if you don’t look closely. On Carnaby street, you will find an eclectic mix of stores and many restaurants and cafes.

Places to Eat At Soho

If you want to skip the shopping or only want to do it for part of the day, then there are other things you can see in London.

What are the Portobello market opening hours?

Notting Hill and Portobello market were made famous by Hugh Grant and Julia Roberts movie “Notting Hill”. Access to this area is easy; just take the Central line and get down at the Notting Hill tube station.

The best time to visit this market is on Saturdays.

You can also spend part of the day shopping at one of the big malls of London – Westfield London . The shopping mall is just two tube stations away from Notting Hill at Sheperd’s Bush on the Central Line.

Camden Town Market is a great place to check out especially if you are a Foodie. You can find a variety of food from around the world at the food stalls and shop for cheap knickknacks, vintage clothes and other items at this market. You can reach Camden Town Market from Camden Town Tube station on the Northern line.

Save this 3 days in London Itinerary for later. Pin it!

The Beaches Toronto – Top 10 things to see and do

Toronto Islands – Read BEFORE you visit

This site uses Akismet to reduce spam. Learn how your comment data is processed.

This website uses cookies to improve your experience while you navigate through the website. Out of these cookies, the cookies that are categorized as necessary are stored on your browser as they are essential for the working of basic functionalities of the website. We also use third-party cookies that help us analyze and understand how you use this website. These cookies will be stored in your browser only with your consent. You also have the option to opt-out of these cookies. But opting out of some of these cookies may have an effect on your browsing experience.
Necessary Always Enabled
Necessary cookies are absolutely essential for the website to function properly. This category only includes cookies that ensures basic functionalities and security features of the website. These cookies do not store any personal information.
Non-necessary
Any cookies that may not be particularly necessary for the website to function and is used specifically to collect user personal data via analytics, ads, other embedded contents are termed as non-necessary cookies. It is mandatory to procure user consent prior to running these cookies on your website.
SAVE & ACCEPT
Loading Comments...